Catching Up and Rebooting

This has been one seriously neglected blog. It's not like there haven't been things to talk about related to my EVE Online activities. It's simply that in the crush of the day to day, I either didn't have time, energy, or motivation. And to be fair, this blog has never enjoyed much in the way of engagement from its few readers so posting often felt like shouting into an echo chamber.

But lately, I find myself wanting to muse more about Signal Cartel, the things our amazing members do, the challenges of leadership in a corp like ours, and my own EVE-related fan art, among other things. Although podcasts and Twitch streaming seem to have trumped blogs in recent times, I still prefer a blog for my own blatherings.

Since my last post, EVE Vegas 2016 came and went and was awesome! Johnny Splunk and I gave our talk "Cultivating a Counter-Culture in New Eden" which was very well received.

In mid-November, the Ascension expansion brought Alpha Clones to New Eden. In anticipation, we ramped up on T1 fitted exploration frigates and new player welcome packages. As expected, we had a huge influx of new members. Our Alliance chat and forums were crazy busy helping new players get a good start in EVE. I wrote "Alpha Positive" for Imperium News to share our own and other new player friendly corps' experiences as a result of Ascension. 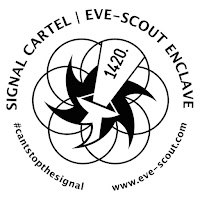 On January 20, 2017, Signal Cartel turned two years old. It has been quite an experience watching our little idea bloom and see our culture evolve and mature. I am constantly amazed and delighted by the interesting, smart, engaging, dedicated folks we are fortunate enough to attract to our ranks. To-date, we've received over 3,600 applications from those wishing to join us, with an average of 600-700 members at any given time (I rigorously remove 60+ day inactives in support of our desire that membership count should at least roughly reflect how many members actively log in and play). Our lean management and relatively unstructured organizational style have worked very well so far, both from a security and a "demands on leadership" perspective. Most surprising has been how well our Credo has held up after all this time, with relatively little change.

I'm calling this a reboot but it's still my same old EVE blog. I'm just focusing my content going forward:


My new goal is to post at least twice a month. And as part of the reboot, I've tweaked font size and color in posts for better readability and updated the sidebar with links related to Signal Cartel stuff.

So that's that for now, I hope you'll share your thoughts on upcoming posts and add a link to this blog on your own EVE media site.

Edited on 3/26/2017 to add In-Character Fiction to the content list above. How could I have forgotten it before?!