I'm kind of a bad CEO. I haven't looked at Corporation Assets in forever but for whatever reason I checked them last night. And noticed that we had impounded assets in what looked like a couple hundred or so stations. What!? Seems I had forgotten that assets of biomassed characters convey to their (player) corp, and quite a few former members had terminated their characters.

Now, most of the stuff was not worth the effort to travel to get it or pay a courier, and some was inaccessible anyway. So I trashed a lot of it. But there were some goodies in there...7 Geckos in one station, some spendy implants and ships in a couple of others, lots of T2 gear in others. So, I thought...okay, I'll go on a wander and get it all out of Impounds, contract it to a hauler alt, and get it rounded up to put to use for the corp.

Only...I didn't know how to get the impounded stuff released and it was COMPLETELY non-obvious from within the Corporation window or Impounds tab. No buttons...no useful tooltips...no helpful context menu choices. Hmmm.

So I Googled "EVE Online corp assets impounded" and the first hit was a handy support article from CCP, which starts off with:

A corporation may find some of its assets to be "Impounded" inside stations, which CEOs and Directors may release through paying a fee that equals 50% of the current rental price for offices in the respective station.

The article then goes on to explain events that cause items to be impounded plus some industry-related issues, and ends with:


Should a corporation have re-rented an office in a station where it has impounded items, those can be delivered into the corporation hangar without additional fees.

Okaaay. I review the list of items left in the nearest station six jumps away and think, well, I'll just go there and figure this out. So I fly over, dock up and look again at my Corporation window Impounds tab. Nothing new there. Hmmm. I read the support article again. I'm sure not gonna rent an office here to get the stuff, but hey, might as well check what the rents are here. So I click on Offices in the Station Services panel and ... oh... 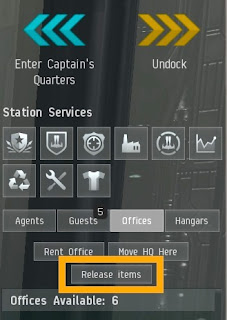 
Now, I've been playing EVE for 10 years and should be used to this kind of thing. But apparently, all the QoL improvements made to the game in the last couple of years have ruined my "old days" EVE UI instincts. These days, I'm just annoyed when things that should take a minute take an hour due to lack of information or non-intuitive design. A simple change to the support article I linked earlier would have saved me that hour:


A corporation may find some of its assets to be "Impounded" inside stations. Using the Release Items button in the Station Services window's Offices tab, CEOs and Directors may release impounded assets by paying a fee equal to 50% of the current rental price for offices in the respective station.

Sigh, heavy sigh. Now off I go to the next of 35 stations where there are assets impounded of sufficient value to hopefully be worth the trip. Gee, if only there were a MultiRelease button in the Corporation Impounds tab that listed all stations with impounded assets, their estimated value, cost to release, single station Release Items buttons, and one great big Release All button. Hey...a girl can dream, can't she?
Posted by Mynxee at 7:29 PM