The Engine of Interesting Experiences

In 2007 when my first EVE character was a two-day old newbie mining her little Gallente heart out in the rookie system Bourynes, a friendly 2003 pilot named Edohatrem Inur struck up a conversation. He convinced me to join his corp along with a bunch of other newbies he'd recruited. The opportunity to harvest knowledge directly from a veteran player fast-tracked my EVE experience in many valuable ways.

What goes around, comes around...in more ways than one. Not only do I now find myself leading a corp doing the very same thing for exploration-minded newbies, but in full-circle fashion, Edo recently joined Signal Cartel. A self-styled glittervet (kind of like a bittervet but with more optimism and an interest in helping new players), he is still up to his old tricks in Bourynes and elsewhere engaging "adorable newbies" (as he calls them) with his special brand of tough love and carrot-on-stick recruiting tactics.

Edo is fond of pointing out contradictions and questioning assertions. I learned long ago to be amused rather than annoyed by this, since it can lead to interesting discussions and reflections on how we change and grow as players. Case in point: I grumbled recently about the time demands that leading Signal Cartel imposes on me. He immediately pointed out the contradiction of the situation with assertions I posted just over a year ago upon my return to New Eden regarding what I wasn't interested in, to wit:


HA! Guess I'm eating those words now, as my peaceful, credo-bound corp is at 275 members not quite 3 months after public launch... 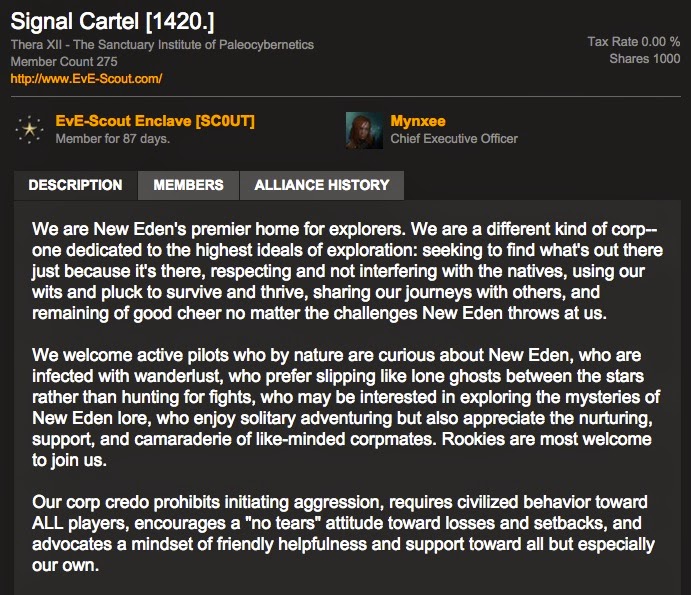 The contrast between a year ago and now is amusing. But I can roll with it because I've been around EVE long enough to know that nothing stays the same. Anything can happen. Being open to new things--like EvE-Scout founders G8keeper and Johnny Splunk approaching me to lead a peaceful exploration corp--leads to new friends and new experiences. As I've said before, the Signal Cartel experience has given me a fresh perspective on the game, a sense of purpose, and interesting new challenges. All of that is made even better when old friends like Edo decide to come along for the ride...and he is by far not the only one who has done so. Quite a few friends and acquaintances--many who were or are pirates, amusingly--have joined Signal Cartel and contribute significantly to the camaraderie and success of the corp.

Relationships are clearly the engine of interesting experiences in New Eden. Whether those experiences are dramatic and sweeping (e.g, BRAVE's recent troubles) or result from taking a path less traveled (as in Signal Cartel), they all create ripples--sometimes with far-reaching and unanticipated outcomes. The unpredictable way that those ripples, even the tiny ones, intersect with others and evolve will trump assertions every time!
Posted by Mynxee at 1:23 PM